I stepped out of house this morning to get the Sunday paper when I saw a snake crossing our driveway. I knew it wasn’t a rattlesnake by the look of the tail, but didn’t know if it was venomous or not. It’s not. I was told it was a bullsnake by someone on Twitter. My Audobon Southwest book did not have it in there so I wasn’t able to ID it. I thought it was going to be like identifying a bird. The pictures and illustrations sometimes don’t really help. There can be a lot of variation within a species. 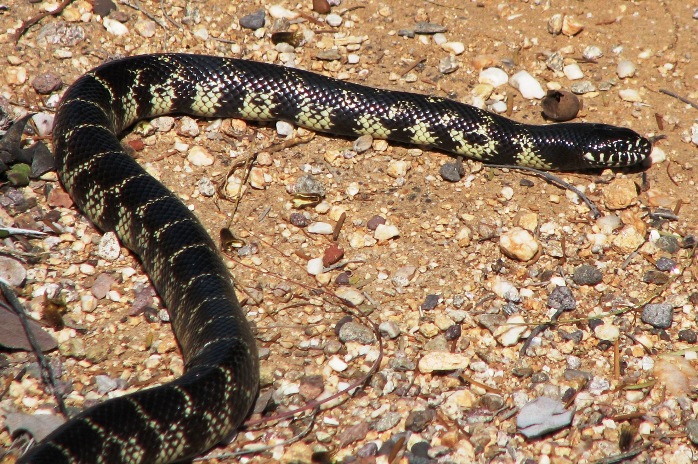 This is the first snake we’ve seen since moving to Tucson. I’m not going to worry about snakes in the driveway or in the front of the house. I’ll just avoid them and they’ll go away eventually. Though I suppose if I’m expecting visitors I’ll have to warn them. If one gets into the backyard, garage, or–shudder–house then I’ll have to do something. Anyway Melissa did not freak out. I guess it helped there was a screen door and 20 feet separating her from it.

I also took a short video of it so you can see its tail better.

So far I’ve seen rabbits, jackrabbits, quail, lots of other desert birds, chipmunks, ground squirrels, and a bobcat in our neighborhood. I’ve heard but not seen coyotes. I think my foothills experience will be complete when I see javalinas.

We are in Tucson until Tuesday. I’ve posted a few more pictures of the house, a few pics from the Tucson Celtic Festival, and a few more critters. You can click on any image to see a larger version of them. The largest images are at the bottom.

This will not be our permanent home. We will be renting until we can find a location that we really like. It’ll give us time to be thorough. Tucson is a great buyer’s market, but terrible for the sellers. More people in Arizona are upside down on their mortgages than just about any other state.

We are very lucky to be able to stay here. You can click on any of the images for a larger version.

Critter and festival pics below the cut.