Duolingo just hosted Duocon (virtually). It’s an event they’ve started doing two years ago. You could think of it as one long infomercial. Duolingo is a great way to get you started learning a language, but you won’t achieve fluency with it if that is your goal. You’ll eventually need to find other material and tutors to get you there.

You can watch all the talks here. Patton Oswalt kicks it off.

So the video at the top is all of Duocon and watching it reminds me so much of the HBO series Silicon Valley’s Pied Piper.

It is interesting. I wasn’t aware of Duolingo’s English Test which actually seems to be a good and affordable service available to the public for foreign students wanting to get into universities that require such a test.

I’ve been watching the full Duocon video a little bit at a time and it’s more impressive, interesting, and enjoyable than I thought it’d be. At the same time it reminds me more and more of Pied Piper from HBO’s Silicon Valley. The most surprising thing is the use of AI for the voices. They use voice actors, but then they manipulate the voices for the characters for the lessons.

What’s interesting they align their lessons with CERF. Their goal is to get people to B2, but if you get to level 5 of a language it’s equivalent to A2. 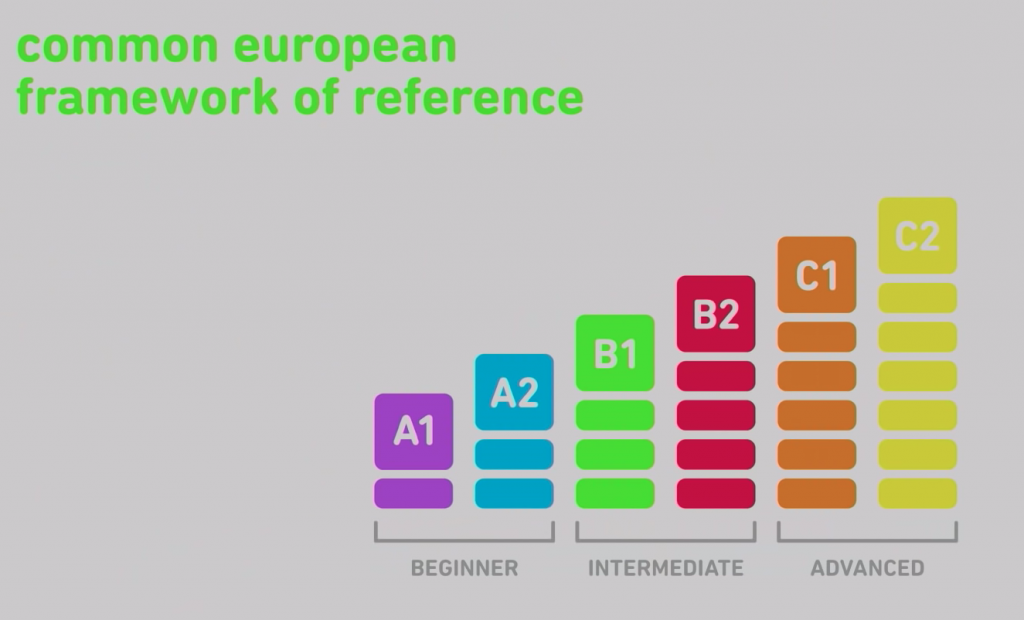 I started off with German for the first six months and then I added in Russian. A few months ago after I finished the German tree I started Spanish. German keeps adding stories, so I go back to those. Spanish also has stories and podcasts. Russian doesn’t have either feature. I do have some background in all 3 languages. I took 1 year of Spanish and 2 years of German in high school. I have a minor in Russian from college. I am not fluent in any of these languages yet. I’ve forgotten most of my Russian, but I can still read and pronounce it. I’ve been doing Duolingo for 18 months now, but I haven’t done it exclusively. I added in reading, listening, and video material mostly to German. My goal is to be fluent in one language before tackling another. I should say tackling fluency in another language. I probably shouldn’t be juggling three languages.

Here’s a list of languages in chronological order of starting to learn more of and how much I’ve learned if I can quantify it.

I’ve decided that I have no real interest wanting to learn more French at this time, but really want to be able to speak German well. Considering how much time I invested in Russian I feel I ought to achieve a level of fluency in it as well, but that could be the sunk cost fallacy. I was going to have an opportunity to speak Russian on our now cancelled 2020 Baltic cruise which is the reason I started using Duolingo along with German. I knew more Russian so I didn’t feel like I had to brush up as much to be a tourist as I did for Germany. There may also be a bit of a sunk cost fallacy in learning Gaelic too, though I am quite proud it was the first language I learned mostly on my own.

I want to speak Spanish better because it’s such a practical language to know living in Tucson and being so close to Mexico (though I don’t want to visit while their murderous drug wars continue). German was and is my first foreign language love. I have German ancestry. I also want to learn Cherokee because I have Cherokee ancestry and I am a citizen of the Cherokee Nation. I want to learn Gaelic because I love Scotland. It’s the one language I actually had a short conversation in.

I won’t start a fourth Duolingo language until I’ve completed the tree of at least one other language. That would be Russian because I’ve done more and it has less material than Spanish.

There are a few other languages I’m interested in. Latin, Greek, and American Sign Language. Here are my current languages I want to learn and in order of importance:

Spanish is probably the most practical of all the languages. The one I’m likely to use most in my daily life or that I could use. I don’t plan to seriously tackle other languages until I’m satisfied with my progress in German.